What Happens When Stocks Go Down 25%

It is often said that the stock market is the only store in town where customers run out of the door when prices go down.  But the idea that you should be more optimistic as prices fall is much easier said than done.  Especially when it feels like the store is on fire.

The backdrop for this difficult environment remains stubbornly high inflation and the Federal Reserves stated commitment to further increase interest rates.  The Feds aggressive policy is an attempt to bring down inflation by slowing consumer and business spending, with the outcome possibly being a recession.  As a result, markets have fallen as low as 25% below their peak this year.

Given the depressed market prices and the Feds actions, you might assume that companies were struggling to make profits in a deteriorating economy.  In fact, this has yet to be true.  Company earnings in the S&P 500 have increased this year by about 6%, as the consumer has remained strong.  All the jobs lost since the pandemic have been recovered, and the unemployment rate of 3.5% is the lowest since 1969.  The bear market has not been a result of poor company earnings. The reason for the decline has been falling multiples, or the price investors are willing to pay for those earnings.  Multiples have fallen by 30% on the S&P 500, and by far greater levels for many companies both large and small.  Put a different way, the market has been repriced as if a recession is already here.

Eventually we will know in hindsight if the markets have discounted a recession by too little and need further decline, or if there has been an overreaction to a recession that ends up being mild or never arrives.  Right now, we can see that something will have to give.  Recessions are historically accompanied by an average decline in company earnings of 10-20%.  This level of deterioration could likely result in further market declines.  At the same time, a recession means higher unemployment, a condition to keep looking out for.  It is said that when a neighbor loses their job, it is a recession; when you lose your job, it is a depression.  Look around, your neighbor still has their job (and Amazon boxes are still arriving every day).  In any event, remember that historically the market will bottom well before a recession is over and before unemployment makes its way through the economy.  The market is a leading indicator, as we have been reminded of this year.

Forecasting is difficult, if not impossible.  What we can do with certainty is look at similar environments in history to gain a perspective to where we are and where past periods have gone next.  You may find some level of comfort in understanding that buying stocks in a bear market historically has resulted in strong returns.  It may not be easy but buying things when they are on sale is a winning strategy.

This is the ninth time the S&P 500 Index of large U.S. companies is down 25% or more since 1950. Below are the forward one, three, five, and ten-year returns from down 25% in the S&P 500.  Every one-year or more period showed positive returns while just one 12-month period was negative. 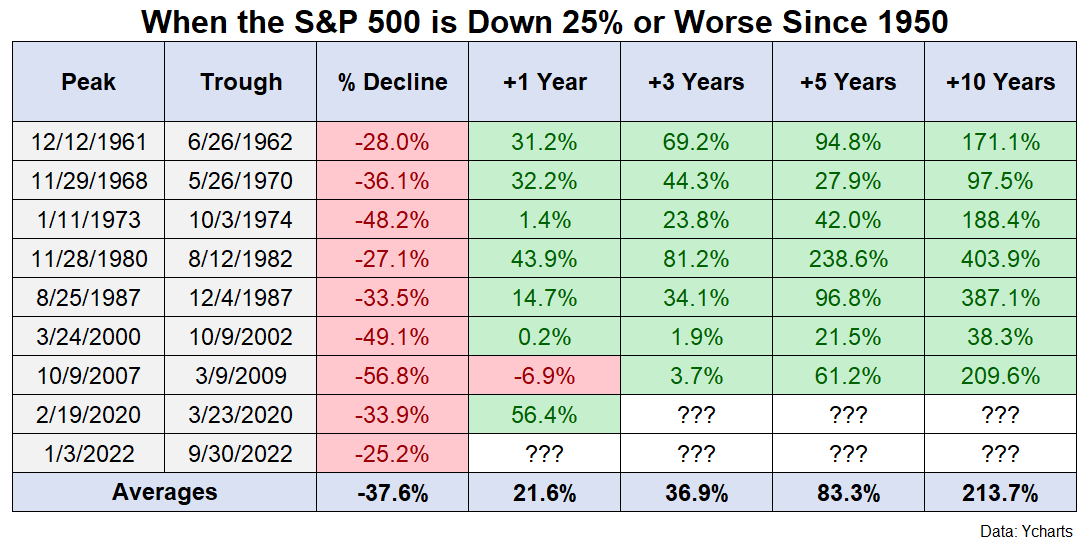 Here is the same data for the Russell 2000 Index of smaller companies, which this year has fallen 30% for only the seventh time since its inception in 1979.  Smaller companies tend to be the leaders in an economic recovery, and you can see the average returns after a large decline are substantial.

A common and natural response to the above data is a listing of all the risks that exist today: high inflation, possible recession, Fed tightening, war, geopolitical risks, unknown black swans, or any other.  It is true that these risks are real.  However, every single period of decline in the data above had its own risks and narrative about why the future could not possibly get any better.  And yet those recoveries shown in the tables were real.

The stock market does not fall 25-30% very often.  In previous times when it has, long term investors who stuck with their investments or were able to buy more were richly rewarded.  Past performance does not guarantee future results.

The average bear market during a recession lasts 13 months, with the current bear starting in January.  Given the depths and duration of the selloff, its seems likely that downturn is closer to its end than to its beginning.  Things certainly could get worse in the near term.  We just cannot know how much worse, and to what level the risk of recession has already been priced into the market.    Fortunately, we do know that owning stocks after they have fallen 25% or more has historically led to greater wealth, and that every pervious bear market U.S. history has eventually led to new all-time highs.

Perritt Capital Management, Inc. is the Registered Investment Advisor for Windgate Wealth Management accounts and does not provide tax advice. Consult your professional tax advisor for questions concerning your personal tax or financial situation and your insurance agent for insurance advice.

Data here is obtained from what are considered reliable sources.  We consider the data used to be relevant and reliable.

Past Performance does not guarantee future results.